Really great news from Fox Valley at the N Scale Collectors Convention-- They are introducing the 4400 Evolution Series of locomotives from GE in AC and DC. Below is the AC details. The DC details are on the Extra Net System. The test samples looked great. For those of you who don't know, the owner of Fox Valley Models, used to be the production Manager for Intermountain. Fox Valley knows what they are doing. The units will be a quality product. 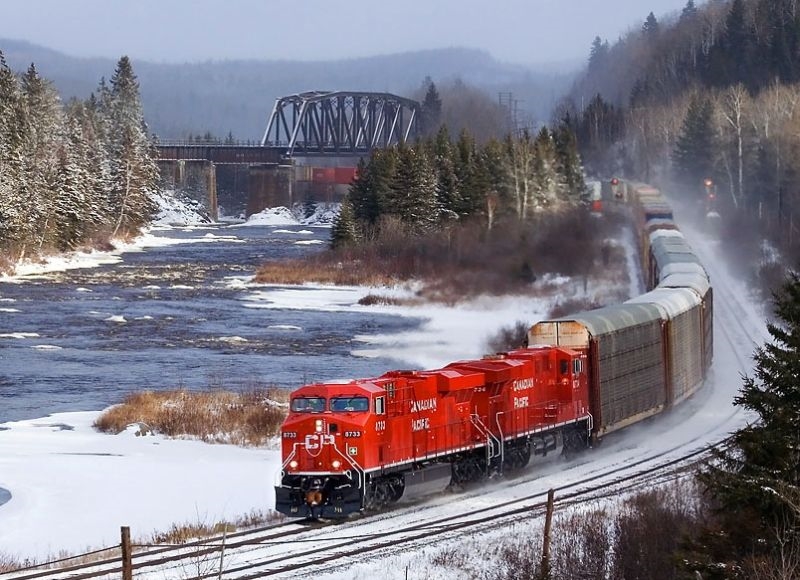 We don't have all the details and spec's yet, but as soon as we get them we will add them to this page,  We wanted you to get this announcement up as soon as possible. The balance of the information will be available on our extra net system called Porters. If you would like to sign up to get access to the advanced information you can do so by going to this link:

The Evolution Series (also known as "GEVOs") are GE Transportation Systems' new diesel locomotive models that meet the U.S. EPA's Tier 2 locomotive emissions standards that took effect in 2005. The Evolution Series locomotives can be delivered with either AC or DC traction motors, depending on the railroad's preference. All are powered by the new GEVO 12-cylinder engine which delivers equivalent power to the older 16-cylinder FDL engine while consuming less fuel and producing fewer emissions.

The ES40DC (Evolution Series, 4000 HP, DC traction) replaces the former Dash 9-40CW model in GE's range and, like the former model, has been delivered exclusively to Norfolk Southern. NS appears to prefer a slightly lower-rated locomotive which uses less fuel while producing the same tractive effort but also reduces wear on the engine components than higher power models used by other railroads.

CSX began receiving delivery of 200 ES44ACs (referred to by CSX as ES44AH locomotives) for 2007-2008 in December 2007. While primarily intended for unit coal service, they will likely also see general service. The 'H' in "AH" is symbolic of the heavier than standard configuration with High Tractive Effort software. CSX's low speed, high tractive effort software is very similar to that used on Union Pacific Railroad units. Additionally these units will be equipped with software to operate in DPU or "Distributed Power Unit Mode" as remote control helpers.

In September 2008, Norfolk Southern purchased 24 ES44ACs numbered 8000-8023 and NS began receiving the first of these units in October 2008. They are the first new AC locomotives ever purchased by NS. These new locomotives will be used for pusher service in long haul coal trains.

Kansas City Southern's units are all painted in a Southern Belle (KCS) scheme. The KCS units are being painted in Erie by GE, while some of KCSM have been delivered in primer to speed up delivery time. KCSM 4679

The ES44C4 (Evolution Series, 4400 HP, AC traction, 4 traction motors) is the newest model in the series. It is similar to the ES44AC, except that it has four traction motors instead of six. The center axle of each truck is unpowered. This is referred to as an A1A-A1A wheel arrangement. BNSF is the launch customer for this model, ordering 25 units numbered 6600-6624.

The Evolution Series locomotives are visually similar to the previous Dash 9 and AC4400CW, and they ride on the same frame. The cab and almost everything below the level of the walkway are visually identical to late Dash-9 and AC models. As with the AC4400CW and AC6000CW, some railroads (notably CP, CSX, FXE and IAIS) have specified radial-steering trucks in place of the Hi-Ad truck on AC units. Some CN units use the modified cab (with "teardrop" windows) and 4-step end platforms characteristic of CN's Dash-9 fleet.

Almost all of the hood (the central air intake to the rear) is new. The most notable spotting feature is the much longer radiator section. The radiator "wings" are thicker than on the Dash-9 and AC series, and they have been raised to nearly match the height of the cab along the centerline. They extend further rearward to be flush with the end of the hood, and they are flat underneath. The canted radiator intakes underneath are taller but not as long. A separate section of the "wings" ahead of the radiators, beveled at the edges and flush with the level of the radiators on top, houses the air-to-air intercooler system. Later units have raised screening above the radiators at the rear.

Owing to the shorter 12-cylinder engine, the central hood section is shorter in length, with six tall doors per side instead of eight. This section of the hood is taller than the Dash-9 and AC series, and is angled (rather than rounded) at the top edges. Early Evolution Series units had grabirons mounted on the sixth door on the left side of this section, rather than on the rear of the hood.

The section under the exhaust stack has three doors (rather than four) and is taller than the central hood section. The exhaust stack is closer to the radiator area and, as a result of the taller hood, does not extend as far above the roof.

The central air intake area is also shorter in length than on the Dash-9 and AC series. The intake on the left side has been shortened to nearly a square; the one on the right is longer. Early AC units use the forwardmost hood section of late AC4400CW units. As with the latter, they may have either two or three dynamic brake intakes on the left, with corresponding variations in the number of outlets on the right. They retain the inverter cabinet of the late AC4400CW on the left behind the cab.

Visual differences between the AC and DC units are few. In contrast to the Dash-9 series, DC Evolution Series locomotives retain the shell of the inverter cabinet of AC units, albeit with a different panel and hatch arrangement. Above this cabinet, DC units have dynamic brake inlets in the first and third postions, with a gap in between, although later AC units have also adopted this arrangement. Under the left walkway, a subtle difference between the two types is the thicker and more numerous traction motor cables present on DC units.