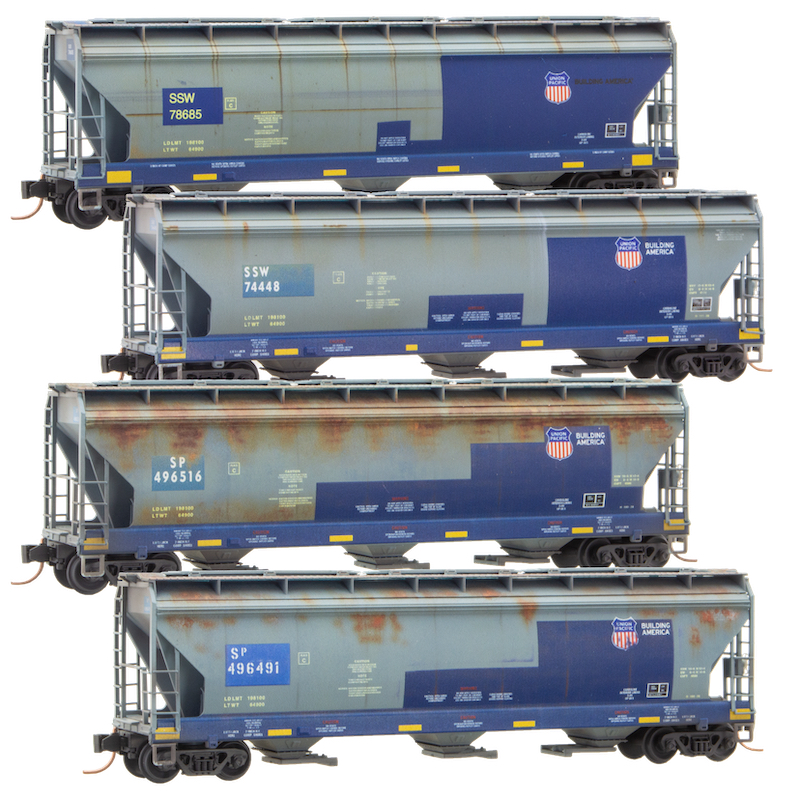 Micro Trains is about to send us the Special Run of Union Pacific (Ex Golden West Service) 3 Bay ACF Repaints. We just received the first images. They are below, they have been produced to look weathered and dirty to fit in with the other Union Pacific weathered and filthy cars we have done in the past. They should be here next week, Enjoy

These 4600 cu.ft. 3 Bay Centerflow Covered Hoppers are painted blue w/paint-out markings, white lettering, and will feature light/moderate to heavy rust & weathering to simulate a real world appearance. Two of the cars will be lettered with SP (Southern Pacific) roadmarks, and two will be lettered with SSW (St. Louis Southwestern) roadmarks. All cars will have reflectors. Gravity fed, these hoppers are 100 tons, measure 55' 5" long, and run on Barber Roller Bearing trucks.

As with all PWRS Exclusive Micro-Trains products, these are limited run products that will never be produced again.

The Union Pacific, headquartered in Omaha, Nebraska, is a freight hauling railroad that operates 8,500 locomotives over 32,100 route-miles in 23 states west of Chicago and New Orleans. The Union Pacific Railroad system is the second largest in the United States after BNSF Railway and it is one of the world's largest transportation companies.

Union Pacific's main competitor is the BNSF Railway, the nation's second largest freight railroad, which also primarily services the Continental U.S. west of the Mississippi River. Together, the two railroads have a duopoly on all transcontinental freight rail lines in the U.S.