We found some new photos of the Nutrien Potash cars with new reporting marks! This is getting exciting!

Once there are enough road numbers from Nutrien painted on their cars and in circulation we will be able to build these cars!

Want to pre-reserve your cars before everyone else? Put your reservation in today!

There is an enormous amount of interest for these cars. I can see that we will sell out very quickly once they go into manufacturing! I completely understand the demand, they are gorgeous! 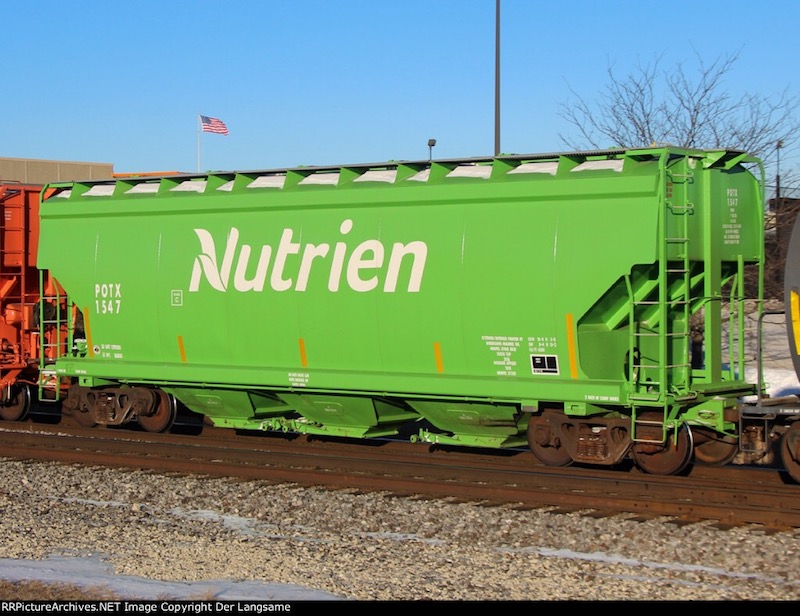 As many of our customers who follow financial markets will already know:

The merger of two of Canada's biggest fertilizer names became official in January, 2018 as shares in Nutrien Ltd. commenced trading on the TSX on Jan. 2, born out of the combined merger of PotashCorp and Agrium.

In 2016 a merger between Agrium with rival fertilizer PotashCorp of Saskatchewan was first proposed.

Saskatoon-based PotashCorp is one of the world's leading suppliers of potash and a major producer of other fertilizing minerals. Calgary-based Agrium, meanwhile, was a leader in other commodities and had an extensive network of retail operations.

The deal worked its way through a series of shareholder and regulatory approvals before finally becoming official in January 2018.

The combined company has more than 1,500 farm retail centres, and employs more than 20,000 people across operations in 14 countries — but will remain headquartered in Saskatoon.

So our customers will understand, Nutrien (Potash Corp and Agrium) and Mosiac are the three (now 2) shareholders that own Canpotex. Canpotex markets potash around the world (not in North America).

So, you will soon see Nutrien's freshly painted railcars cars promoting the companies new corporate image throughout Canada and the United States.

We at Pacific Western were given advance images from Nutrien of the first car to be repainted. Please note the roof walks haven't even been applied yet.

Expect more images and Video to be coming in the near future.

You will notice below there are two groups of Green Nutrien Cars coming. Why? Nutrien is going to be re-painting some of their POTX 1000 and 2000 series NSC Potash Cars.

Please note the 1000 and the 2000 series cars are structually different. Long Sills vs Short Sills. So we will produce 24 of each, allowing you to build a 48 car Green Snake if you wish.

We expect most customers to want some of each version.

We only have an image of the first car from the  POTX 1000 Series. We will publish images of the additional cars as they become available.

Want to be an active part in getting these cars made? Have you seen these running on the rails? Send us pictures of the green Nutrien cars!