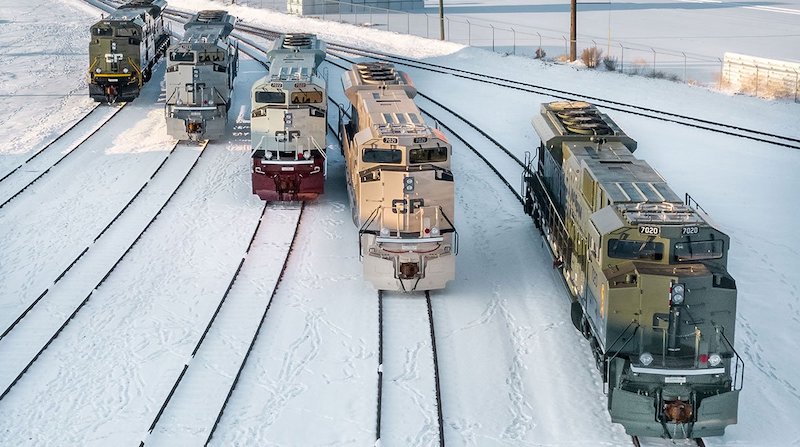 On November 15th 2019, We published a media page regarding the new Canadian Pacific Special Locomotives to Honor US and Canadian Military SD70 Acu's.

We didn't send out emails to all of our customers, or officially announce this project on our website we wanted to see how many would place reservations on the locomotives without an e mail, we were very happy with the huge response we got.

We talked to a manufacturer about making these locomotives, however, a final decision has not been made. To make the engine a SD80 or 90 Mac is required. Do you know a manufacturer who makes that engine in N Scale? Should the manufacturers decide not to make the locomotives NARC will consider to manufacture the Canadian Pacific Special Locomotives to Honor US and Canadian Military SD70 ACU’s.

We are not saying that the North American Railcar Corporation is going to manufacture the locomotives at this time, and we can't tell you if anyone of the other well know manufacturers in North America will. This is why there is no pricing associated with the locomotives at this time. So don’t call us and ask who is manufacturing them, or what the price is, we will not be allowed to tell you until the time is right, so please be patient.

But if you want to place an order, so we know how many of you are interested, be our guest.

We know there are thousands of our customers who will want these engines. When we started making cars under the NARC label we wanted to make cars we see here in the Pacific Northwest that were not being done by other mainstream companies.

If they won't do it we will. Lets see if they will!

We are now officially announcing Special Locomotives to honor US and Canadian Military reservations to our customers.

For those of you who have not heard, Canadian Pacific has been rebuilding their SD90MACs into new units designated as SD70ACUs (essentially an SD90 chassis with a SD70ACE body).

Canadian Pacific has recently painted units in CP Red and White modern scheme. They have also painted a few units in the traditional Maroon & Gray Scheme with Block and Script lettering.

We want you to know Candian Pacific has just painted 5 new locomotives in Canadian and American Military themed paint and graphics.

One other important note:
Although no official announcement has been made so we are not at liberty to mention the company, we do know plans to make these engines are in the works. Word has spread through social media and we have been inundated with calls from customers who want to reserve them.
We have decided to created temporary SKUs for the different paint schemes and will enter the MSRP as TBA, (to be announced.)  There will be no delivery date posted until we have more information.   Please do not call us asking for this information because it is not available.

If you wish to place an order you may do so using the little information we currently have. We will release additional information as we get it.

We are releasing this information now so that our customers around the world can see the new paint images and information published by Canadian Pacific.
2 years ago I had dinner with someone from the CP management team and we talked about the UP Heritage Units. I said "wouldn't it be great if Canadian Pacific did something similar"?  Sometimes it pays to put a little bug in the right persons ear!

We thought you would enjoy learning about why Canadian Pacific decied to unveil the comomerative locomotives.

CP personnel studied the paint colors and patterns that branches of the Canadian and U.S. militaries
applied to tanks, planes and warships. Photo – Canadian Pacific

Here is the offical release from Canadian Pacific

Canadian Pacific (CP) unveiled five specially painted locomotives on Remembrance Day in Canada and Veterans Day in the U.S. honouring the culture and history of the armed forces. The five Electro-Motive Diesel SD70ACUs will take the message of military pride across the CP system. 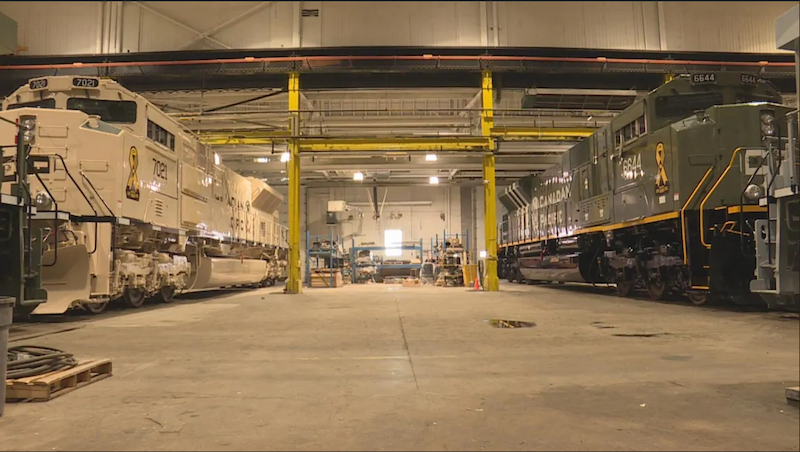 "As a leading employer of veterans, CP is proud to commemorate military machines and the brave men and women who've operated them in conflicts around the world," said CP President, CEO and veteran Keith Creel. "As these locomotives pass through communities across the CP system, I hope those who see them will reflect on the sacrifices made by so many of their countrymen to protect and defend their freedom." 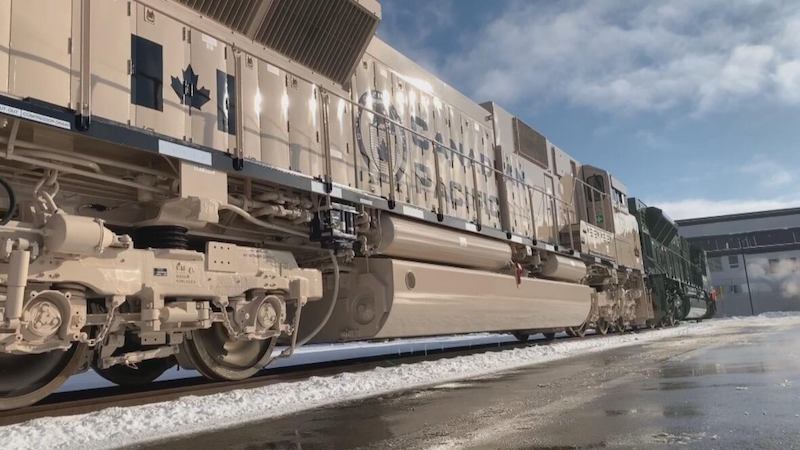 One of the five locomotives was painted to represent Afghanistan military operations. (Helen Pike/CBC)

CP personnel carefully studied the paint colours and patterns that branches of the Canadian and U.S. militaries applied to tanks, planes and warships. Based on their research, they devised five liveries for these locomotives:

Four of the five locomotives bear a Canadian flag on one side and American on the other. CP operates in both countries and employs veterans of both countries' military services.

"We are proud to support our veterans and the invaluable skill and experience that they have gained serving their country," said CP Senior Vice-President Engineering, Mechanical and Procurement Scott MacDonald, a veteran. "These locomotives are a symbol of our support. They will operate in regular service and further support our commitment as a proud employer of veterans in Canada and the United States."

"It's hard to quantify how much impact
you're going to have — just showing
somebody that we remember you.
And this is going to be going for years."- Travis McLean

CP was recently awarded a Gold Top 10 Military Friendly® Employer designation by Viqtory Media. In October, CP joined Homes for Heroes and other stakeholders for the grand opening of the ATCO Veterans Village in Calgary, a community of tiny homes aimed at getting homeless veterans off the street. Through its Spin for a Veteran program, CP has helped raise more than $800,000 for the cause. 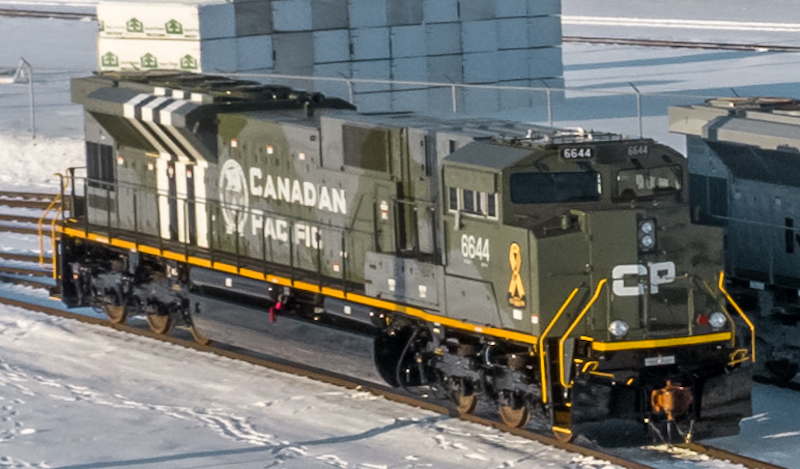 Want to see the Unveiling Video of the click here! 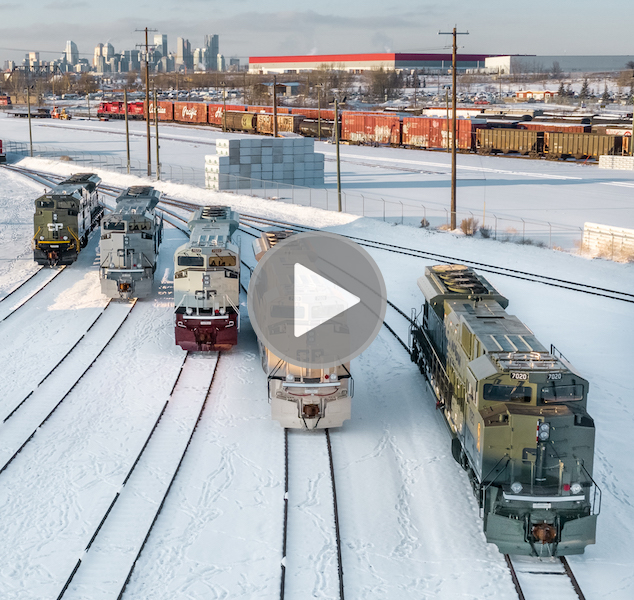 Canadian Pacific will be painting 10 of its newly rebuilt SD70ACU locomotives into its historic tuscan red, gray, and gold paint scheme.

On Monday morning, CP shared an image on social media of the two freshly painted locomotives, Nos. 7010 and 7015, with the message, “We take pride in our past and look to the future with the same boldness, ambition and innovation that drove the creation of the railway."

In an exclusive interview with Trains News Wire, Baden Tidd, assistant vice president of mechanical, says the railroad plans on painting a total of 10 heritage units. Locomotives Nos. 7010 to 7014 will wear CP’s original tuscan red, gray, and gold paint scheme with tuscan red script lettering along the long hood. Locomotives Nos. 7015 to 7019 will feature block lettering along the long hood.

The locomotives are part of an order for 60 SD70ACUs using the railroad’s stored SD9043MACs. The locomotives are being rebuilt by Progress Rail in Kentucky. The first four SD70ACUs, Nos. 7000-7003, were recently put in service in British Columbia.

Locomotives Nos. 7010 and 7015 are in Kentucky and Tidd expects them to be shipped to Canada within a week.

Tidd says the idea to paint heritage units was hatched earlier this year. The mechanical department worked with CP’s heritage department, which maintains the railroad’s historic fleet of passenger cars and locomotives, to come up with a number of options to present to CEO Keith Creel. In a nod to the railroad’s historic beaver logo that came back in 2017, Creel selected the tuscan red schemes.

The heritage units are expected to be assigned to service primarily in western Canada. Tidd says they will be put into regular service just like any other locomotive.

“These are wonderful looking locomotives but they’re meant for revenue service,” he says.

The other eight heritage locomotives will painted before the end of the year.

This is not the first time CP has painted a freight locomotive into its historic tuscan red scheme. In the early 2000s, it painted GP38-2 No. 3084 into the classic tuscan scheme. The railroad’s FP9s used for its business train and other excursions also wear the classic livery.

And just to be complete, here is the modern paint scheme the balance of the units are painted 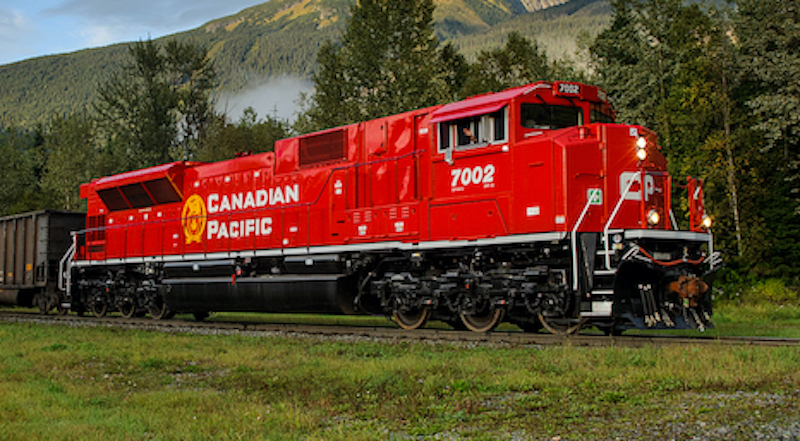