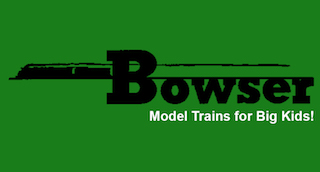 Check out the 40ft Rib Side Boxcar from Bowser, this car is a special run car, so there will be a limited amount of cars available to purchase.

We included some information about this car below to give you the background and why this car was so important to the Canadain National fleet.

Pssst... Check out the tilted wafer below!

- Single cars are a random number from the 4 pack. -

You will receive one of the following Random Car Numbers Listed Below:

NOTE: Car Number is Not Guaranteed if you request a specific car.

Here is some History about the Logo and Car:

Over fifty years ago a famous emblem first appeared in Canada. This was the CNR Maple Leaf which, together with the CPR Beaver, must rank as the finest insignia ever used on Canada's railways. It was in the deepest days of World War II, May 1943, that Canadian National Railways announced that a new symbol would appear on its freight cars; the maple leaf with the initials C N R and the tilted wafer bearing the proud slogan "Serves All Canada". Previous to this, the name of the railway had appeared in simple block letters on the car sides. The magazine "Canadian Transportation" (successor to the "Canadian Railway and Marine World" and the earlier "Railway and Shipping World") described the innovation as follows in its issue for May, 1943: 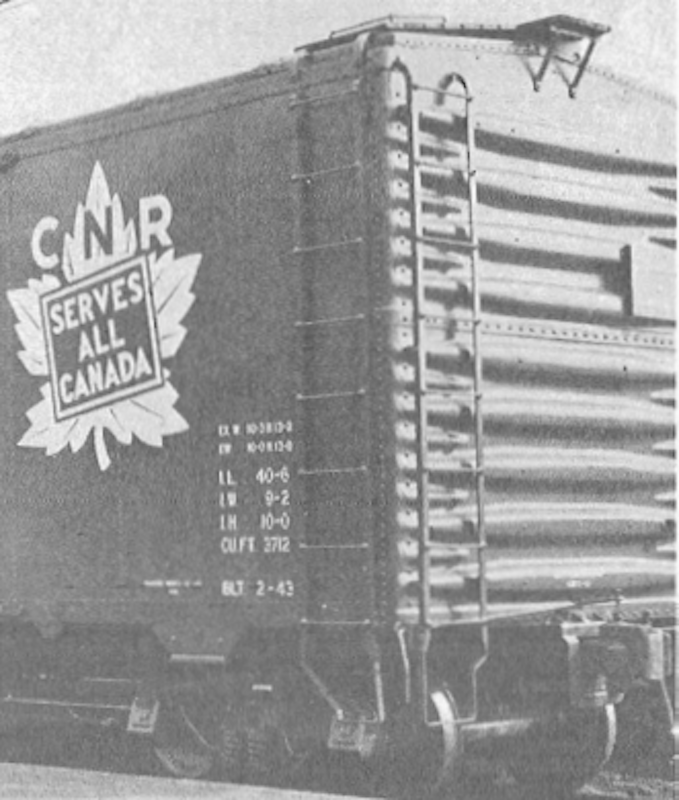 The accompanying illustration shows one end of a new box car on Canadian National Rys., this car being the the first delivered out of an order for 1,1 00 all-steel, 40-ton box cars 'placed with Canadian Car and FoundlY Co. , Ltd. The body of the car is painted in the standard box car red, with a maple leaf, and the slogan "Serves All Canada", prominently superimposed in white. The car lettering, numbering and specifications are in white also.

The red in which the car body is finished has been extended to the trucks, wheels and all underslung equipment, previously painted in black.

The new cars are 40ft. 6 in. long inside, 13 ft. 8 in. high to eaves, 10 ii. wide at eaves and with extreme width of 10 ft. 3 in., 9 fl . 2 in. wide inside and 10ft. high inside. Capacity is 3,712 CLi. ft.
Advice received since the foregoing was written is to the effect that the slogan shown in the accompanying illustration will be placed on approximately 100 cars, and that very probably similar slogans will be used on other cars. In future, all box cars going through the paint shop will be pa int ed red, including the trucks, wheels and all underslung equipment. Decision as to display of a slogan on repainted cars will be made later

The maple leaf insignia was a success and was used on very many CN freight cars, diesel locomotives and, later, passenger cars, over the years. Various modifications were made from time to time, including the changing of the colour of the maple leaf from white to green. Some experimenting with the slogan was also done as the words "Canada's Largest Railway" appeared on the maple leaf for a time in the mid-1940's; however the slogan "Serves All Canada" emerged as the standard.
In the mid-1950's a significant change was made when the tilted wafer bearing the slogan was straightened up. The tilted wafer was a symbol inherited from the Grand Trunk and dated back at least as far as 1896; the reasons for its original adoption are not clear at the present time. Coincidentally with the "straightening" of the wafer, the Maple Leaf insignia began to be applied to the new passenger cars as well as some of the larger steam locomotives.

The end of the application of the Maple Leaf came in 1960 and 1961 when CN adopted its new symbol, still in use, affectionately known as the "Wiggle Worm" or the "Wet Noodle". Gradually, as cars were repainted or retired, the Maple Leaf became rarer and rarer. However it is not yet gone; even after more than thirty years it can still be seen throughout the system, sometimes in remarkably good condition. Even examples of the tilted wafer, out of use for nearly four decades, still are seen from time to time. Your editor recalls seeing, in April 1993, a Maple Leaf insignia, in excellent condition, on a box car used in tool service in Kitchener, Ontario.

So here's to the CN Maple Leaf on its 50th anniversary, and may it continue to be seen throughout North America for years to come.