Spruce Falls Power and Paper Company, Limited operated its own railway in Northern Ontario for many years. Known as the Smoky Line, it was a non-common carrier railway running some 50 miles north from Kapuskasing to a power plant in Smoky Falls built to serve their paper mill. Originally, it was intended to build the power plant at Sturgeon Falls on the Temiskaming & Northern Ontario. Later, the railway served its owner for decades hauling pulpwood to their newsprint paper mill. It also served the residents of Smoky Falls which was without a road until 1974. The railway also served construction work on a six-year (1960-1966) Hydro-electric project on the Mattagami River that consisted of three generating stations. This required a daily mixed train to Little Long Rapids. In 1946 a 10.5 mile spur was built to Neshin Lake to pickup wood from the Opasatika River watershed.

Kapuskasing was first named MacPherson Station circa 1905 with the coming of the National Transcontinental (NTR) being built through the area. To avoid confusion with a like-named place in Manitoba, in 1917 it was re-named Kapuskasing, Indian for "Bend in the River".

In 1914 during World War I a POW camp was created on 1,300 acres which was cleared for an experimental farm, in an isolated area of which Ontario had many! Of the over 1,200 prisoners interned there, there was not one successful escape. Its extreme cold in winter and year round isolation obviously discouraged that! 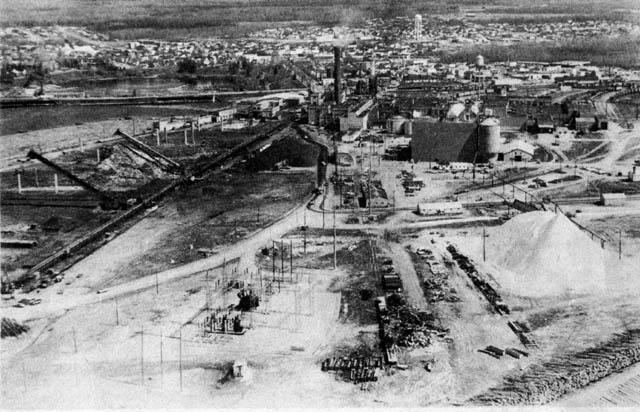 Following closure of the camp in 1920, Kimberly-Clark in Wisconsin, was encouraged to expand into Ontario creating Spruce Falls Company and starting construction of a paper mill. Shortage of housing caused a turnover in workers who lived in huge bunkhouses of 100 men in a single room! To overcome this handicap Spruce Falls invested $3 million to have 150 homes and a 100-room hotel built along with a 22-bed hospital. Kapuskasing was incorporated in 1921. 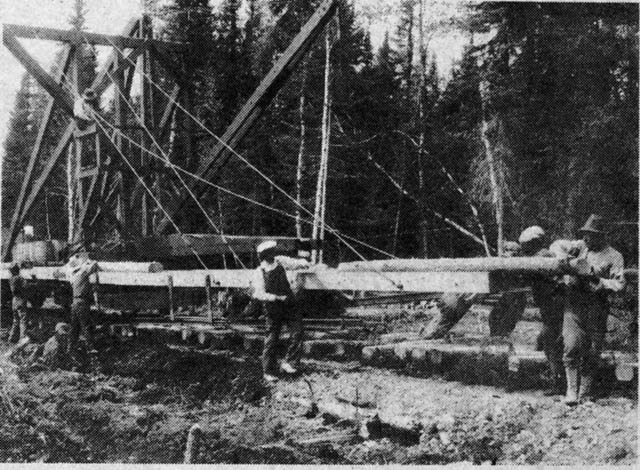 In 1922 the sulphite mill began production with 500 employees, with a capacity of 115 tons of pulp per day.

The New York Times bought 49 per cent of the stock and an expansion followed in 1927 to open a four machine newsprint mill and hydro-electric power plant of 75,000 hp capacity that ensured its success. 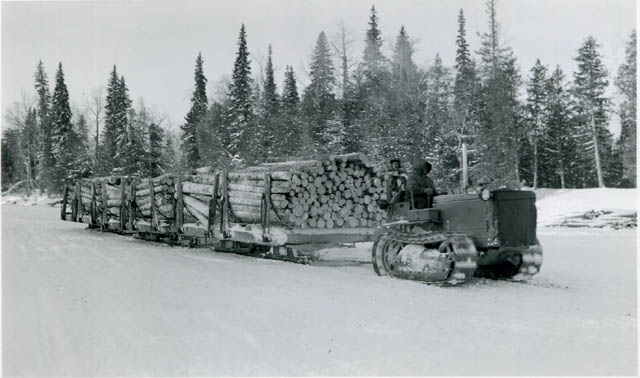 Tractor train used back in the 1930's at SFP&P bush camps. Collection of Ron Morel

Expanions took place again and again over the years. By 1974 the paper mill was employing 1500 at an average hourly rate of $4.60 for an annual payroll of $15.1 million and producing 1,000 tons of newsprint a day. The chemical pulp mill over 500 tons per day with 185 tons of this being sold as bleached sulphite. There was a $15 million freight bill for all of this. The Woodlands division was leasing 6,400 square miles of crown timber land in addition to the 289 square miles of freehold, with 80% of about 750 men working 230 days per year. 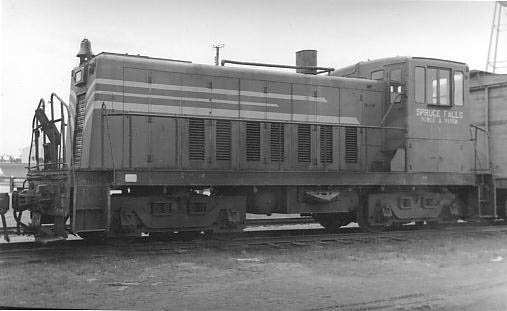 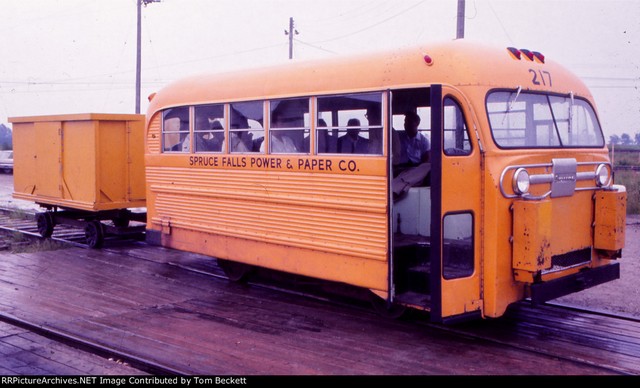 Typical of such non-common carrier railways the Smoky Line made do mostly with used equipment handed down by other railways often through equipment dealers. One such piece of equipment acquired in March 1946 was TH&B X-714 an Extra Gang Cook Car originally built as a wooden open platform baggage car in 1905 by the CPR Hochelaga Shops.

Equipment in later years included 120 end rack flatcars, 5 boxcars, 1 depressed centre flat (for transformers), a Jordan spreader, a snowplow and a flanger along with some passenger equipment. A modern fleet of 75 70-ton 60 foot boxcars with "Hydroframe" cushion draftgear and built by Pullman-Standard was added 11/62 to deliver newsprint to New York City and Washington. By 1973 forty carloads a day were being shipped.

Ontario Hydro acquired a used 70-tonner (ex SJ&LC 53) from Andrew Merrilees (D) to aid with the work trains as well as two baggage cars and four coaches from the CPR in June 1960. Two were wooden coaches (1595 and 1596) that had made their last run for the CPR on "The Tripleheader", May 1,1960. In 1963, two steel coaches were acquired from the CPR and one of these, 1462, wound up in Toronto at the Ontario Hydro Hearn Generating Station in Ashbridges Bay for the employee's model railroad club. It is presently on the York-Durham Heritage (tourist) Railway.

In 1965 two ex CNR Port series sleeping cars went to an on-line hunting camp. They were left behind after abandonment of the line.

Early in 1974 a road was built between Fraserdale on the ONR and Smoky Falls, following which 30 miles of the line was abandoned and dismantled leaving 19.5 miles between Kapuskasing and Nechin Jct. former junction of the spur to Nechin Lake. This was left in place for a steam tourist train operation. It would have used the ex CPR passenger equipment and an ex-T&NO/ONR 4-6-0 (ex 129 CLC #907 1909) Normetal 219 that had been kept as a spare locomotive for the Normetal Mining Corp's 12-mile private railway which used a GE 80-tonner. The proposal was still-born with the untimely death of Ron Morel, a Smoky Line conductor and the project's chief proponent. All of the equipment was scrapped except for the locomotive which still exists, greatly deteriorated and damaged beyond use.

The railway's last official day of operation was May 21, 1974. The dismantling was carried out by Andrew Merrilees Ltd. using a GE 44-tonner. It was involved in a wreck with a Smoky Line train with the contractor allegedly being to blame.

Following dismantling of the railway, SFP&P diesels continued to switch the extensive plant in Kapuskasing.

In 1991, Spruce Falls Inc was created when employee ownership (52%) took over with Tembec (also, employee owned) holding 41%. A $360 Million modernization quickly followed. A sawmill was built in 1995 and expanded in 1997. Newsprint and specialty paper grades on four paper machines furnished by two TMP pulping lines built in 1993 and 1996 and old newspaper deinking facilities built in 1992 and expanded in 1995. The mill's annual paper production in 1997 totalled 371 000 tonnes.

In March 1997, Spruce Falls Inc. became a subsidiary of Tembec Inc. which continues to operate the mill.