We are ready to announce our next car:

A couple of years ago a customer asked us at a large Train Show why we didn't like Canadian National. When we explained we did not have any reason to dislike Canadian National, we asked why he had that impresssion. "Well you are not making any of the Hawker Siddeley Cylindrical Hoppers in CN with large Noodle graphics".

To which we replied "That's because Hawker Siddeley didn't make any Cylindrical Hoppers for CN (4550 cuft) with large Noodle graphics".

The customer then showed us images of what he thought were Hawker Siddeley 4550 cu ft Cylindrical 4 Bay Hoppers with CN Noodle Graphics.

We then explained, the images he was showing us were not Hawker Siddeley built cars, they were built by Marine Industries in Quebec.

About 30% of the 4550 cu ft Cylindrical Hoppers were built by National Steel Car (NSC), and 40% were built by Hawker Siddeley (HS) and the balance were built by Martine Industries Limited (MIL).

Many modelers confuse the HS car with the MIL car. Although similar they are very different, "if you know what to look for when closely examining the cars".

In the early 1970's the Canadian Government facing increasing demand for grain transportation capacity decided to buid a new car to meet the needs of Canadian Grain Industry for the 1970's, 80's, 90's and beyond.

It was decided that a standard design would be agreed upon, but each of the three major Canadian manufacturers could vary the details of the car as long as the overall size, shape and capacity of the car was the same.

The MIL hoppers were a modified copy of the HS hoppers. The basic tank is the same, but the slope sheet (end supporting wall of the car), end frame, brake lines, air reservoir, auxiliary reservior, control valve location, ladders, running board and running board supports are different.

We will publish additional information about the Marine Industries 4550 Hopper with close up images of the differenent detail parts, in the coming days.

Remember, these cars have never been available before in HO Scale.

In test marketing customers have asked us to run 12 road numbers for five of the paint schemes. All the rest we will produce 6 road numbers.

We will also do 6 cars equipped with Toggle Lock Pneumatic Gravity Gates!

(see close up image below) 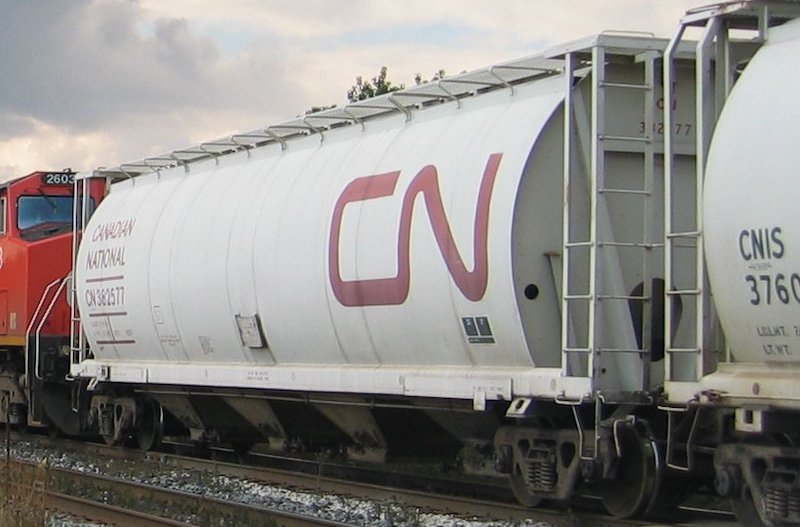 Fourth Consecutive Record Month Leads to Best Ever Quarter, Record First Half of the Year, and Record Pace for Carload and Intermodal Shipments

Quotes
"From Canadian farmers to port terminals, these achievements are a testament to the strength of our supply chain and its ability to meet the continued strong global demand for grain. Strong demand for grain through the second quarter, coupled with strong execution by CN’s dedicated team of railroaders, allowed us to achieve our record quarterly results and for the first half of 2020. Those results come after challenges earlier in the crop year. CN’s fourth consecutive record month of grain movement and record total tonnage crop-year-to-date demonstrates the continued positive impacts of CN’s capital investments on increased network capacity and resiliency.”
- James Cairns, Senior Vice-President Rail Centric Supply Chain, CN

“CN is proud to play an important role in providing an essential service for the agri-food supply chain, and in the face of our current global market environment, CN’s team has enabled us to have such an exceptional season. Despite all the difficulties we faced earlier this year, we are confident that the high volume of shipments experienced in June will continue until the end of the crop year and that CN and our partners of the supply chain will continue to deliver for the grain industry.”
- Allen Foster, Vice-President, Bulk, CN

CN is a true backbone of the economy, transporting more than C$250 billion worth of goods annually for a wide range of business sectors, ranging from resource products to manufactured products to consumer goods, across a rail network of approximately 20,000 route-miles spanning Canada and mid-America. CN – Canadian National Railway Company, along with its operating railway subsidiaries – serves the cities and ports of Vancouver, Prince Rupert, B.C., Montreal, Halifax, New Orleans, and Mobile, Ala., and the metropolitan areas of Toronto, Edmonton, Winnipeg, Calgary, Chicago, Memphis, Detroit, Duluth, Minn./Superior, Wis., and Jackson, Miss., with connections to all points in North America.

Don't forget to order your New Marine Industries 4550 cu ft 4 Bay Cylindrical Hoppers and set your own new Grain Records on your own layout!