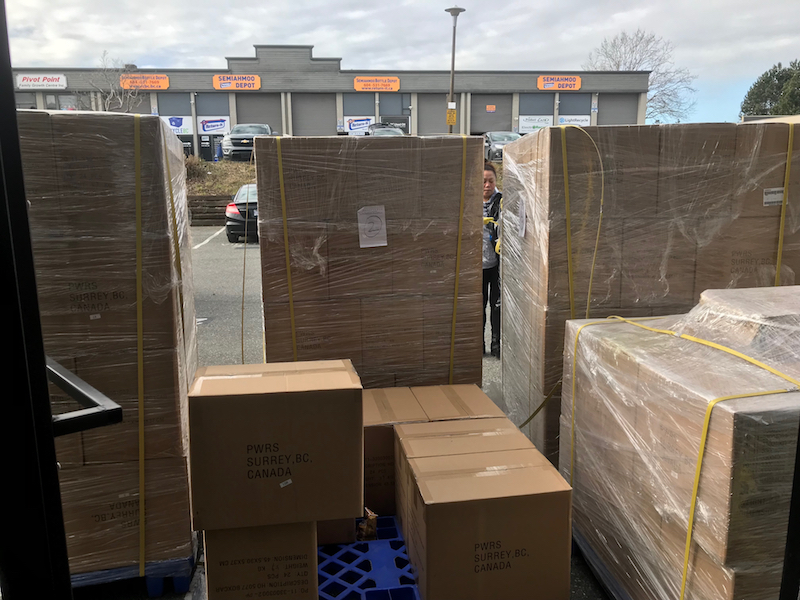 The 5077 Pullman Standard Boxcars arrived and are being unpacked and shipped to all our customers worldwide now!

Did you miss your chance to place your orders? The cars The 5077 Pullman Standard Boxcars are officially Here.

We are going to start charging your credit cards for your orders now, so when they are here we can ship them immediately to you and you don't have to wait any longer for these cars!

We were hit hard with orders and they are still coming in strong.

Please contact us if you have any special charging or shipping instructions as most orders are set to ship immediately.

We are selling out Fast!

We have a very small number left of each of the 6 car sets of most paint schemes.

If you want to guarantee you get your Pullman Standards, place your orders today!

The Chicago North Western cars only had 6 road numbers for those paint schemes.

These are the only prints of the Chicago North Western cars we will be making, after they are sold out we are moving onto the next paint scheme. You know they will appreciate in value once they are gone!

Get your orders in Tonight before we Sell Out!!

Many of our customers are asking for photos of the final cars!

These are just a few quick iphone snapshots we took. Better quality photos will come soon!

Oh one more thing, here are some images taken a few weeks ago of the cars in the final assembily process. 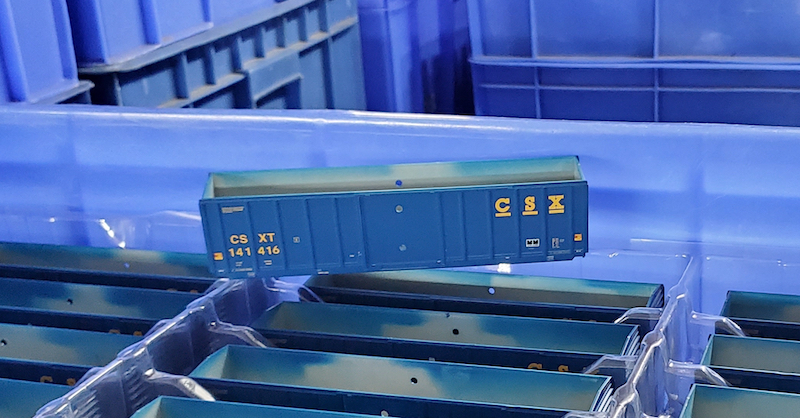 Are you excited? We know we are!

The NEW 5077 Pullman Standard Boxcars are on the water, they are set to arrive within 3 weeks depending on customs.

We know we will sell out very quickly once they are here!

Make sure you get your orders in now if you want to get yours!

Here are the brand spanking new photos we have of the 5077 Pullman Standard Boxcars. They are due to go into manufacturing once the Chinese New Years is over.

Have a look at them and let us know what you think! We had these on display at the Amherst Train Show, in January. 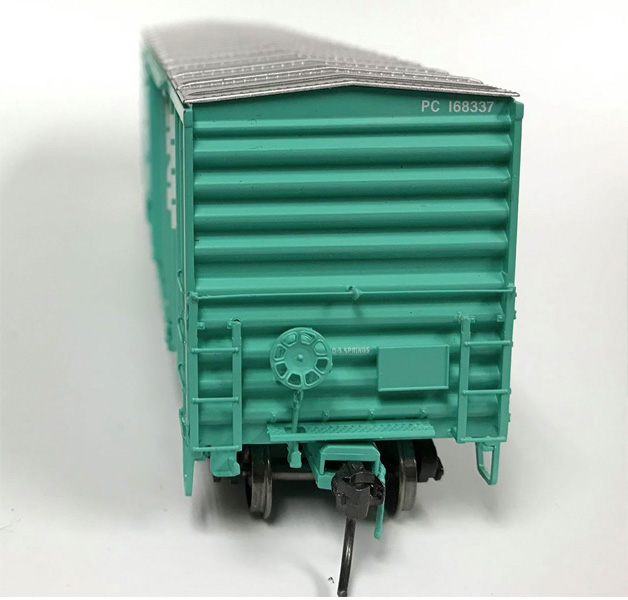 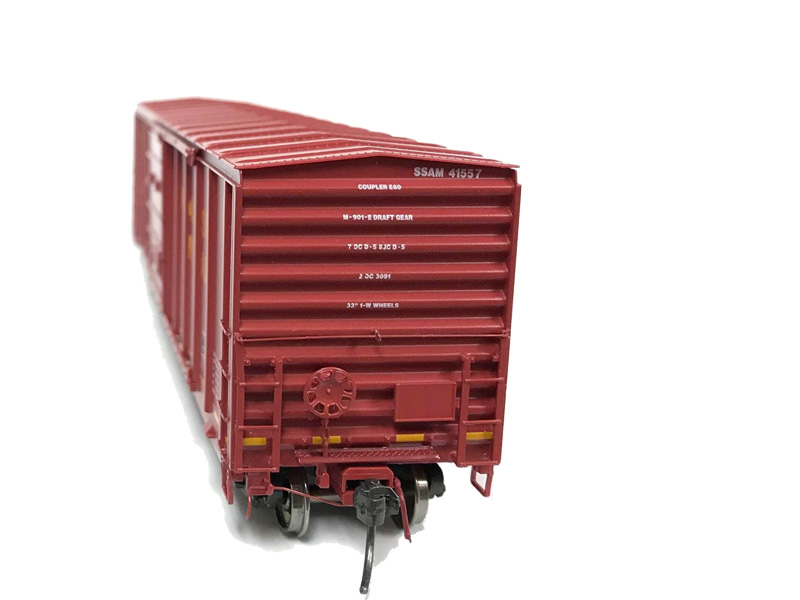 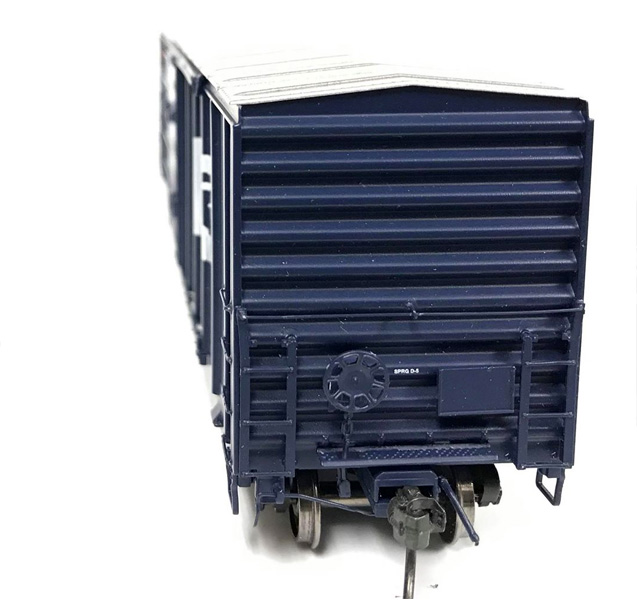 As many of you know we do not want to release cars until we feel they are right. Many of you asked where we are with the release of the 5077's and are itching to see the new release of the paint schemes. Well, here's the changes we made since March, we have moved the end ladders in 3 scale inches, we made the roof thinner, we adjusted the doors so that they are more prototypically correct in the way they hang on the door tracks.

We are very close to going into production. A few days ago, our factory sent us freshly painted samples (shells only) of the cars. We wanted to let our customers see them to get your input, please note these are shells only they do not have ladders, door tracks, grab irons or roof extensions on the sides of them.

We really hope you appreciate and enjoy the level of details we have put in this project. There are 35 different structural versions of the car!

Have a look at the paint schemes of the cars below. There are a few corrections we have already forwarded to the factory.

We are planning on giving final qty numbers to the factory Monday night. We will build a few extra of each paint scheme,

but if you want to get your favourite road......Order Now.

We are EXCITED to announce that we are about to move to the final stage in the production of the Pullman Standard (PS) 5077 box car project — the actual printing of the cars! The unpainted test samples are due to arrive within the next week, after a minor change to the floor. After assuring ourselves that they are perfect, we will have China send us "painted" test samples, which are expected early August. We can't wait to see them, show them off, and give the "go ahead" for China to begin production. We expect to receive shipment of the finished cars this coming fall, and will start shipping them to everyone that has them on reservation.

SHOW THEM OFF INDEED!!!  Visit us at:

We are offering 35 versions (HO) of this car (not including paint schemes), when you take into account all the detail differences. No matter what era you model between October 1974 and today, or what area of North America you model, there are cars in this project you need to accurately reflect traffic on your railroad.

We want to thank everyone at our factory in China for their excellent effort in getting this project to this point. We also want to thank our customers that helped the project by providing photographs and feedback as the design phase moved forward. We've had a few issues along the way related to making sure the plans were correct and by taking the time necessary to research the issues to be sure we got details right, we think the time and effort will be well worth it. We think you will, too.

We are really proud of the level of detail and accuracy that our factory and their team have been able to incorporate into this very complex project. No one has ever done anything this complex in a model freight car project before and we truly believe that you, our customers, will be impressed with the end results once you see them in person and online.

Most road names are already at production levels and some are so close to pre-set production levels that few if any will be left to sell once they arrive, so it's time to get your orders in for this exciting, game-changing car!  Before we go to production, we can change the quantities we will receive; once past that point, if you hesitate or delay getting your order in, it may already be too late.

It's involved a Herculean effort in getting drawings to the point of approval, because the project is so complicated, but we know you will be impressed once you see the results. Stay tuned…

You are already familiar with our first project, the never before produced Hawker Siddeley 4550 cf. 4-Bay Cylindrical Hopper, presented in 2009 to coincide with the introduction of the brand new Government of Saskatchewan green Tiger Lily paint scheme. We went beyond industry standards as we produced this car, and other roads using Hawker Siddeley 4-bay hoppers, in 15 different body variations.

In 2013, we brought the 4000 cf. Coal Gondola, to the modelling world in 4 versions: Hawker Siddeley Trenton; National Steel Car; Marine Industries Ltd; and CN Transcona Shops. Here, too, we produced each road name with the minor variations needed to make each model unique and prototypically accurate.

Here we are in 2017! Getting ready to manufacture the newest project:

Here it is, a new model, never before done by anyone…

These have already been done. Didn't Atlas make this car in HO scale?

"No," their cars are 5077 cf. FMC Boxcars, ours are Pullman Standard boxcars

We asked our director of research: "Aren't these cars the same?"

His comment was: "Are 5 Litre Ford Mustangs the same as 5 Litre Chevy Camero's?"

These cars have never been done before, there are numerous paint schemes, and they are seen all over North America.

Pullman Standard built 4,301 5077 cubic foot plate B box cars with sliding doors between October 1972 and August 1979 for seven original customers. In addition, Pullman supplied a total of 300 superstructure kits (car bodies and doors - Berwick Forge and Fabricating supplied the underframes)  to Golden Tye at Pickens, South Carolina for assembly during 1975-76 for the National Railway Utilization Company (NRUC). These kit cars were originally operated by St. Lawrance Railroad and Pickens Railway with NSL and PICK reporting marks during the IDP boom.

The original non-kit customers were: 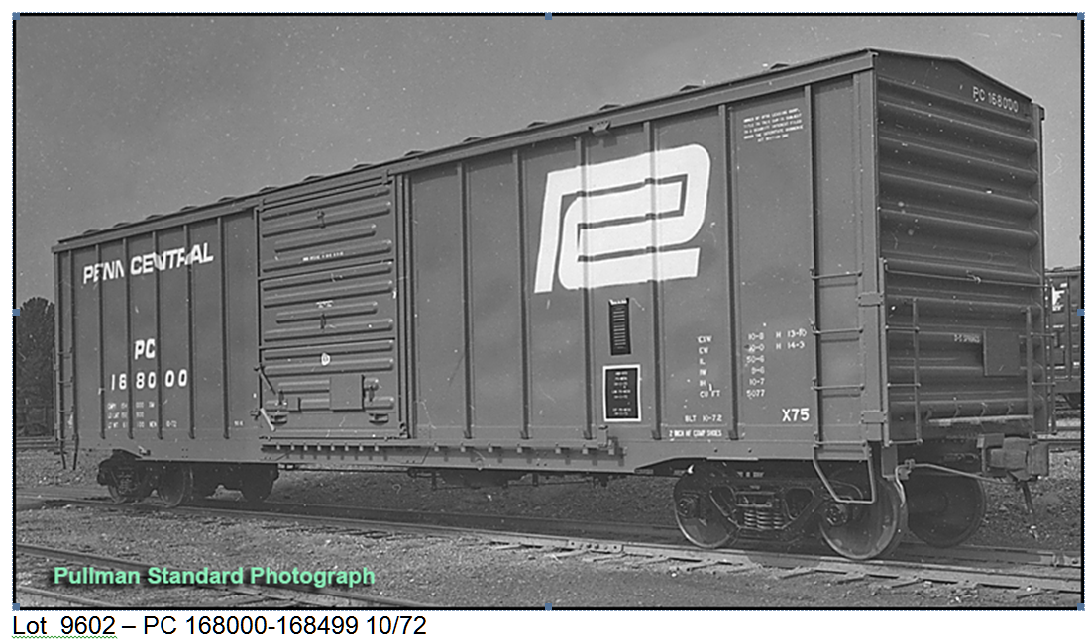 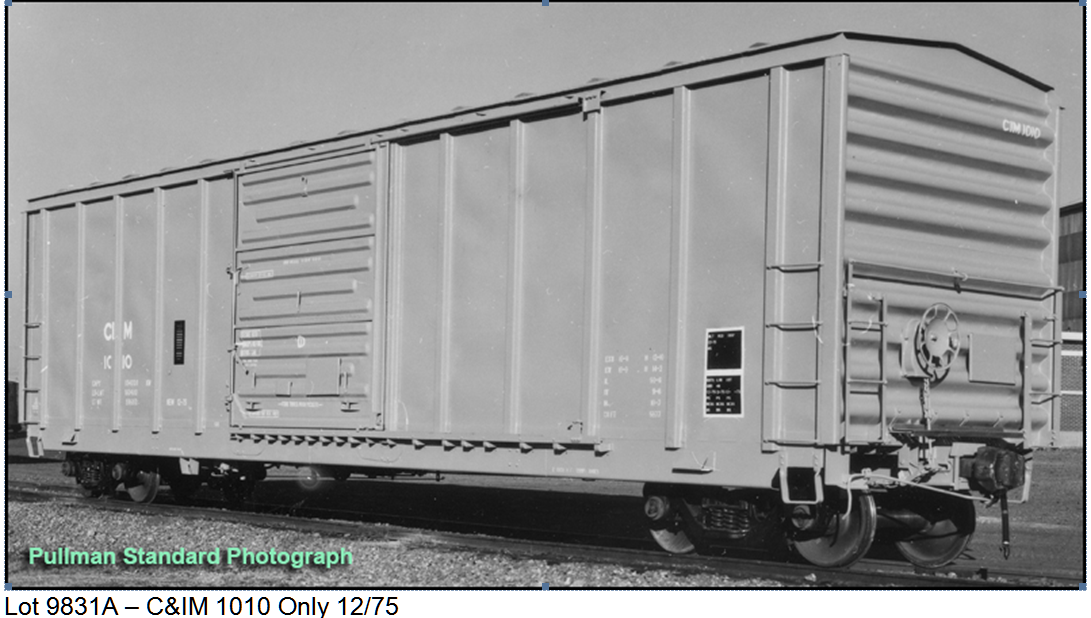 for at least nineteen (19) detail parts such as body side sills, steps, ends, doors, roofs, hand brakes and housings, underframes, ladder stiles and rungs, etc. each appropriate to the model The original kit-supplied/customer-assembled customers were:

The second body style utilized on all of the following 5077 orders was modified to include only ten side posts, all of them constructed from slightly wider “hat” sections of steel channel.

Pullman supplied the car bodies and appliances for the kit-built cars for NRUC, so the body is identical to the PS-built cars. There were four side sill variations employed by Pullman over the five year production span. The first sill was fabricated from L-angle, with the narrow leg at the top of the sill and a notch cut out at each end for access to the trucks.

The next order of cars were delivered with a side sill fabricated from C-channel, with a section of the web removed and the lower leg bent to follow the removed section and welded into place:

The next five orders were delivered with side sills fabricated with plate steel with the lower edge bent into an L-shape, with a notch at the stirrup steps.

The final order was delivered with a side sill similar to that on the second order, with the difference being there is a radius along the lower edge.

On the PS-supplied kit cars, the side sills (along with the bodies) were supplied by Pullman and look like the typical Pullman side sills on 5077 cubic-foot cars. But, since the underframes were supplied by Berwick Forge and Fabricating, the location of floor joists differed from the Pullman underframes and therefore the Huck bolts that fasten the underframe to the side sill are in different locations on the two different versions of the similar sills.

Now, who else would go to the trouble to reproduce this kind of detail? Five different side sill variations!

Again, North American Railcar is providing all five side sills, applied to the appropriate cars to match the prototype. We’re thinking outside the box!

For all the orders, with the exception of one, Pullman equipped the cars with their proprietary 15-panel "bow-tie" roof. The PS-supplied kit cars were also delivered with the bow-tie panel roof.

The one exception was the order for NRUC (NSL), which cars were equipped with Stanray's 15-panel "diagonal-panel" roof.

We’ve even included the seam cap rivets on both roofs. No detail is too small to overlook!

North American Railcar has even tooled a roof extension so that three series of these cars, modified for baled wood pulp and paper service can be accurately modeled. This is another first! For baled wood pulp and Paper

There were three ends provided over the production span of these cars: Plus, when cars were modified for baled wood pulp and paper service, the car ends were reinforced by welding plates between the corrugations, protecting the ends from damage when pulp bales or paper rolls shift. North American Railcar is providing all three original end variations, appropriate for the order depicted, plus, the reinforced 5/5 “sine-wave” end that was modified for pulp and paper service. No one else, before North American Railcar, has been able to offer multiple, accurately detailed ends to their freight car reproductions and still keep them competitively priced.